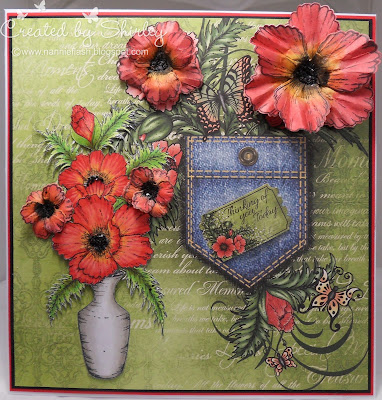 Good Morning Crafters, this is actually my third card using these gorgeous stamps and dies from Heartfelt designs, this latest set Blazing Poppies is one of my favourite sets. I created the flowers (shown at the top and either side of the vase) but stamping the image onto white card then coloured them with my inkpads, I then cut them out with the die that comes with these design set and formed the flowers and layered them up.
The vase and the flower behind it were complete stamps which I also stamped onto white card then used my copic pens to colour them both
afterwards I cut them out completely and in the centers of all the flowers I used a large black glitter and left them to dry.
The base card card is a 8"x 7.75" white card with a first mount out of red card and a second out of black, the backing paper is from the same design set as the poppies and has then been placed on top of the mounts.
I shaped the vase and the other cut out stamped piece and layered them up in the bottom left hand corner, I also placed two of the smaller poppies either side to created a bigger punch of flowers, and at the top of the paper there were a further two printed poppied and on top of these I placed the other 2 poppies that I created earlier. The final flourish is the sentiment also from the same design set cut it out and placed it on the pocket.
This Card is to be entered in the following Challenges:-
http://avenue613.blogspot.co.uk/
http://ameliatworks.blogspot.co.uk/p/current-challenge.html
http://lacysunshine.blogspot.co.uk/
http://www.fairytalestamper.blogspot.de/
http://greatimpressionsstamps.blogspot.co.uk/
http://lilpatchofcraftyfriends.blogspot.com.au/
http://www.scribbleandscrapcrafts.blogspot.co.uk/
http://sirstampalotchallenge.blogspot.co.uk/
http://welove2create.blogspot.co.uk/

Posted by Nannieflash at 09:35

Poppies, what more can I say Shirley than your glorious card ticks all the boxes for me. I have resisted this Heartfelt set so far but it's only a matter of time as I love the others I have from them, so versatile with the matching dies.

It's lovely to see you at Stamping Sensations challenge this month, many thanks for joining in.

A glorious card, Shirley, just stunning...sorry I have not been visiting, had a really bad time with Fibro...love and hugs always xxxx

Oh wow Shirley a most beautiful card, I think most people just love to see poppies, this is gorgeous.xx

STUNNING card! Your poppies look AMAZING--the coloring and texture are absolutely brilliant! Thank you so much for joining us at Great Impressions! HUGS! :) Mynn xx

Oh wow! What a fabulous card, love, love,love all those gorgeous poppies

Thanks for joining us at Stamping Sensations this month

How absolutely gorgeous, Shirley! The poppies are stunning! I knew Brenda would home in on this one! Thanks for sharing it with us at Stamping Sensations.

Your card is really wonderful!
Thanks for joining us at Fairytale Stampers!
Hugs,
Conny

Shirley this is a wonderful creation with great attention to detail and perfect for our 12th ‘ANYTHING GOES’ challenge. Thanks for sharing your talent with us. Good luck.
Hugs
Desíre
{Lil Patch of Crafty Friends DT Member}
{Doing Life – my personal blog}