ABC Challenges - "U is for Unlimited" 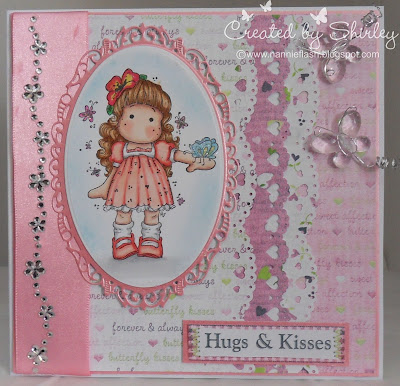 This image is called "Tilda with Butterfly" and I stamped her onto white card and coloured her with my copic pens, afterwards I used a large Nestabilitie Oval die to cut her out and a fancy one for the mount out of pink card. The sentiment was one from the same digi paper set I will explain in a moment and I have also mounted onto a piece of the same pink card.
The base card is a 6.50"x 6.50" white card with a first mount out of pink card, the papers are from Nitwits "Butterfly Kisses" and I have used four papers, the first a very pink one with hearts on, the second a white background with hearts and butterflies on and I have used one of Martha Steward Border punches, the second is a darker pink background with more of the same hearts and butterflies along the edge of this one I have used a heart border punch also from Martha Stewart, the third paper is a sentiment one and this was also punched along the edge with the same border punch that I used on the first one. As I said earlier the sentiment was one I printed from the same paper set as the backing papers.
I then wrapped a piece of pink ribbon down the left hand side and on top I have stuck a diamond flower border and I then placed my mounted image towards the left and the sentiment in the bottom right hand corner, the final flourish is the two crystal butterflies in the top right hand corner.
Now that youve seen my Card I do hope that you will pay a visit to ABC Challenge Blogspot to see what the rest of the very talented Design Team have created for your inspiration and hopefully you will want to take part in this "U is for Unlimited" Challenge.
This Card is to be entered in the following Challenges:-
http://crafting-with-dragonflies.blogspot.co.uk/
http://craftyfriendschallengeblog.blogspot.co.uk/
http://www.hidinginmycraftroom.com/
http://mfpstampshop.blogspot.ca/
http://paperplayful.blogspot.co.uk/

Posted by Nannieflash at 08:30

what a lovely card! The image is sweet and your coloring is gorgeous!
Regina*

Thanks you for sharig this lovely card with us at MFP Speedy Fox and Friends.......Lis

Lovely card but you did not follow the SF&F tutorial .

Oh Shirley this is quite simply beautiful I adore that Tilda image also the gorgeous papers, colours and card design it is top notch
hugs
lorraine x

Lovely card!
Thanks for joining us this week at SF&F challenges.

So beautiful card! I love this girl!

Just beautiful, great colouring and details, thanks for playing with us at Crafting with Dragonflies, blessings Hilde

Thanks for entering "use your favourite colour" challenge at Crafty Friends with your lovely card.
Hugs Diane Louise x

Thanks for sharing at Sweet Stampin'.

So pretty!!! Thank you for joining us over on the HIMCR blog this week!

A sweet Magnolia card. Thanks for sharing with us at Crafting with Dragonflies!

Lovely card and coloring! I adore those fab butterfly embellies :)