A Card for Tracey of Spesch Designer Stamps 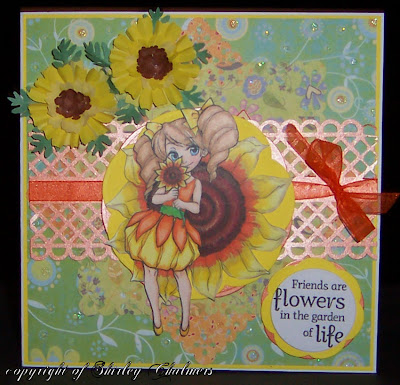 This card has been created for Tracey Feeger of http://speschstamps.blogspot.com/ as a thank you for the free digi image that she is offering on her website as a reward for becoming one of her followers. The image is such a cute and pretty image that I was thrilled to make a card for Tracey with it.
Ive printed out the image onto white card then coloured it my copic pens, then because it didnt quite fit onto any of my Nestabilitie dies I decided to cut it out completely. The what Ive done is punched out two mounts one from orange and one from yellow with my Blossom die then stuck them together by of setting them. Ive done the same with the sentiment a punch that I found in my stash.
The base card is a 7"x 7" white card with a first layer of yellow card, and the papers are from two different packs the first paper is a pretty green flower one and for the second Ive used a orange paper with ribbons on and the third a another flower paper, both these were cut into a square then punched with one of my corner and border set of Martha Stewart punches then layered up again by off setting them.
On top of this I have stuck a border of orange card on which Ive used a deep border trellis punch and before sticking it across my card Ive wrapped a orange organza ribbon around. The bow was attached after it was stuck to my card.
The image was then stuck in the centre and my sentiment to the bottom right hand corner. The two Sunflowers are created with my daisy and sakura petal punches, shaped and stuck together, the centres are another of my very small flower punches then shaped before being stuck in the centre, after which they were positioned on my card with an arrangement of leaves (that had also been punched out) underneath.
Posted by Nannieflash at 21:10

Oh wow,wow,wow Shirley this is stunning what a gorgeous image so beautifully coloured and your design is just perfect.
Hugs
Lorraine x

Super cute Shirley. I love the colours you have given her. She looks gorgeous! Love the papers, flowers and the sentiment is fab!

So nice,
I love sunflower, and your colouring is so great.... :)
hugs
sadia

Oh my goodness this is the best card ever Shirley. You have coloured her beautifully and love those papers and all the elements on the card. What a wonderful inspiration.
mwah
Trace

Wow Shirley what a beautiful card i love the colours papers and details and the image is so sweet.
Paula xxxx

Wow, what a beautiful bright and cheery card and such virbant colours all blended together beautifully.

Have a good weekend.

Hi Shirley,
your card is so fantastic, I like the colours and the papers very much.
Hugs
Melodie

Hi Shirley thanks for stopping by your blog and cards are gorgeous.
Christine x