A Card for this weeks "Sundays with Santa" Challenge 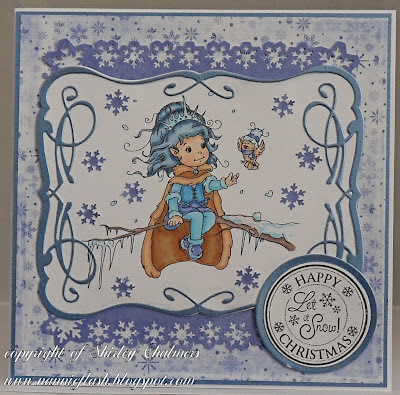 Good Morning Everyone, well after a shaky start the sun has decided to come out and its starting to dry up. We are now nearly back to normal after a busy couple of days with my MILs funeral, and now hopefully we can start the grieving process without all the stress, and its certainly been that since she died two weeks ago. My husbands youngest daughter, granddaughter and step son arrived Thursday evening to spend a night, and this meant a complete turn around of our bedroom and my craftroom, but its all back to normal and I can start to sort myself out.
The funeral was lovely and we had a really nice lady vicar who conducted it, and the hymns were on Cds as we were rather a small congregation, my middle daughter Sarah came with a friend from Towcester so it was a lovely intimate family gathering to say our last goodbyes to her. My husband did have a few tears during the service and his little granddaughter came and gave him a really big hug which of course any granddad would love and enjoy, and of course he did.
But now back to my card, its for this weeks Sundays with Santa Challenge and this weeks its "Never seen Ink" one and as Ive not had a chance to use this Paper Shelter "Winter Princess" image I thought it would be just right. Ive printed her onto white card before colouring her with my copic and tria pens, I then cut her out with the Memory box die, and used another for the mount, its a very pretty scroll edge one and felt it just set the image of.
The papers are from Nitwits, its one of the Christmas digi sets, and the first paper is an all over snowflake pattern then on top is a 5"square of dark blue patterned paper that has had the border and corners punched with my Martha Stewart punch set.
I then used one of the Whimsey sentiment stamps for my sentiment and cut it out with a circle Nestabilite die, and a larger one for the mount.
This card is to be entered in the following Challenges:-
http://clearlyistamp.typepad.com/
http://christmascrafting.blogspot.com/
http://mariannedesigndivas.blogspot.com/
http://christmaschallenges.blogspot.com/

Posted by Nannieflash at 11:15

So glad the funeral went well Shirley, its a hard time for you all and thinking of you, a cuddle makes a lot of difference, so sweet

On to your card a beautiful card and love your colouring, superb, such a lovely image too.
Hugs Linda

So pretty Shirley, love the image and her hair colour is fab!!
Clairexx

So sorry to hear about your MIL, Shirley. What a blessing to be surrounded by so much wonderful family during that time.

Your card is beautiful, and we are so happy that you joined us for the CIC :D

That;s such a pretty image Shirley and so beautifully coloured.

I've thought of you and Ian many times this last week or so and pleased it went as well as these things can.

Have a good weekend.

Such super cute card. It's so sweet and the colours...Yum!
Love n hugs
marie

A lovely card, Shirley, really. Therefor is it so sad that it cannot participate in our challenge...you did not use our sketch...
But, thank you for showing us your work at Christmas Challenges {with sketches}. Hope to see you next time :o)

Such a sad time Shirley but the funeral sounds very special and personal. I love your card, beautiful blues and the image is so cute x

Your card is a stunning creation and we are thankful for sharing this nice card with us .B if you would win a nice prize ,please use a produkt of Marianne Design for your creation .I am curious ,looking forward for the next month to welcome you back with another stunning work.
Hugs Artesania

Hi Shirley stunning sweet creation gorgeous colours love it..
Your MIL's funeral sounds as if she had lots of loving caring family am sure she would have loved seeing all the family together..take care ..

Hi Shirley I am so glad that the funeral went well and that things are returning to normal for you all. I love, love this beautiful card, the image and design are stunning.
Hugs
Lorraine x

What a lovely card. Therefor is it so sad that it cannot participate in our challenge...you did not use our sketch from Christmas Challenges {with sketches}

What a lovely card, lovely colouring, thank you for sharing with us at Marianne Design Divas this month
Hugs
Tracy

Hiya Shirley :D
Your card is great I love that adorable image and your layout shows her off so well. Thank you for joining us at Marianne's Design Divas sadly to win a prize you would need to have used a Marianne D product but we still love to see your creations.

P.S. Do you fancy a crafty get away? I am arranging one for October this year and there are still spaces. Click HERE for details