Well as I write up this post I would say it would be lovely to be outside as the sun is out and its quite warm, hubby has gone of to Norchard (near Lydney) to play trains, they have a steam railway system there and he loves being involved and volunteers every Saturday to it. Anyway back to this fortnights Challenge and this one is for "The Great Outdoors" and we are being sponsered by Karens Doodles this time, 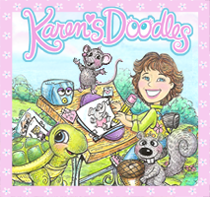 And they are offering 3 digi images as a prize, and this is what they say about themselves:-


Karen Johnson has been drawing all of her life. She has worked on the feature film, “Ferngully The Last Rainforest” and has created animations forDisney, Fisher Price and Mattel. She has illustrated several children’s booksand is currently teaching animation at a college in Wisconsin. She started Karen’s Doodles so she could share her whimsical drawings with crafters from around the world.
And we were lucky enough to have several gorgeous images to play with, and this is the one I chose to use, its called "Man in a Hammock". 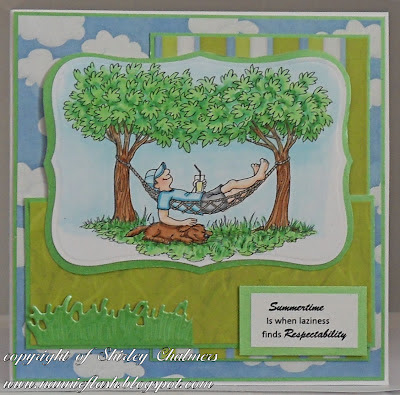 He reminds me so much of my laid back brother-in-law, its the sort of thing he would be doing in the great outdoors rather than the grass mowing. Anyway I printed the image onto white card then used my copic pens to colour it, then used Nesbilitie Labels Die No.8 to cut it out then drew around the die to create the mount for it, The sentiment was one I created on my computer and printed it out and mount it in the same way as the image.
The base card is a 6"x 6" white card and the first mount is a green one and the papers I have used are from the Nitwits "At the Park" digi downloads, the first one is a blue sky with clouds on, the second is
green grass paper and the third a stripe. On top of this is the mounted image in centre with the sentiment at the bottom on the right, I then used some of the left over green card and used the grass Marianne die and stuck it along the bottom of the second mount.
Now that youve seen my card I do hope that you will go and visit The Cards for Men Challenge Blogspot and see what the rest of the fabulous cards the rest of the Design Team have created for your inspiration and I do hope it will encourage you to take part in this "Great Outdoors" Challenge.
This card is to be entered in the following Challenges:-
http://scrapbitzcopics.ning.com/group/cmccopicchallengegroup
http://kraftinkimmiestamps.blogspot.co.uk/
http://sweetstampinchallengeblog.blogspot.co.uk/
http://craftingwhenwecanchallenges.blogspot.co.uk/
http://onestitchatatimechallenge.blogspot.co.uk/
http://pileitonchallenge.blogspot.co.uk/

Posted by Nannieflash at 09:00

Fabulous card Shirley I like the image and the papers.
Kevin xx

What a fun card! Love the image and sentiment! Hugs, Hanneke

Hi Shirley, This is one fab card, just love the image and your colouring is gorgeous.
Hope your keeping well and getting a fair share of this gorgeous weather, take care.xxxxx

What a perfect card for a man. Hubby would LOVE a hammock, so a card with a hammock would be perfect for him.
Cheers, Karen

Oooh, this is brilliant! :) Super card for a guy too!

Thanks so much for joining us at Sweet Stampin this week,

I'm so glad you join us at Color me Creative. You did a great job on your card. I was so glad to see most of us did all different images. Good luch with the challenge.
Hugs, Patricia

Hi Shirley wowzer male creation yep very laid back..just like a man..lol
the Fern Gully film is a blast from the past its one of my DD Alison's fav films & yes still got the video tape..as it was 20+ yrs ago..lol

Thanks for joining in with us this week at Sweet Stampin.

Gorgeous card Shirley,I did look at this image but as you know me to well I just had to go with the caravan....Love your layout and the sentiment is fabulous....Hope your all well and enjoying the sunshine...Take care...
Mandy x

Wonderful card for the guy in your life:)Love the image and your coloring is awesome!
Thanks for sharing with our Crafting When We Can Challenge :)

What a fabulous card for a male Shirley love that 'chill out' image, lol, super card.
hugs
Lorraine x

What a amazing card ;o)
Thanks so much for joining us at Sweet Stampin' this week.

Gorgeous card, I wouldn't mind a go in that hammock on a lovely warm day :-)

Thanks for joining us at Kraftin' Kimmie this week and your card is adorable! Unfortunately you did not follow the challenge guidelines so you are not elligible for the prize.
hugs, Sharon

A brilliant card.. I agree lazing in that hammock would of been ideal over the past few warm days.
Thanks for sharing with us at One Stitch At A Time for our, 'Anything Goes' challenge. Hope to see you back next week ;O)
Choccy x