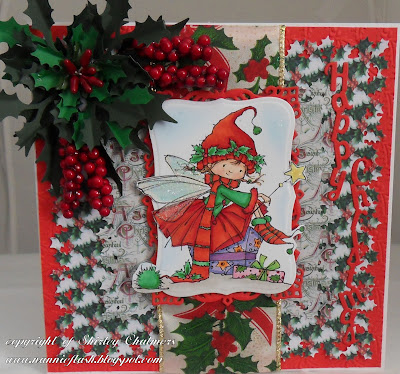 Yes well for me this is a rare treat (at least I hope it is for you to) I have created another card and posted it so thats three in one week, maybe Im starting to turn a corner but then again maybe not. Anyway I bought the 4 new Christmas images from Funky Kits on Saturday and I though I would use this sweet Fairy for my first card, I hope you like it as much as I do, I have coloured her with my copics as always and then used Nestabilitie Labels Die No.8 to cut her out, then used a fancy one for the mount. The sentiment is a Papercrafts die and I have used red card to cut them out with.
The base card is a 7"x 7" yes a different size as the die is quite big, and I have used Joanna Sheen Christmas papers for this card, but Im getting ahead of myself I have used red card for my first mount and I ran it through my embosser with one of the new Embossalious dies, the holly one. I then cut a 6.75" square and used the holly border and corner punches from Martha Stewart to create the first layer, then the Ive done the second one exactly the same but with a 5" square. Then down the middle I have  used a white and holly printed ribbon and attached it to the back of the first mount.
The mounted image was then placed in the center and the sentiment down the right hand side. I then punched out holly leaves with two of the Martha Stewart punches and with some berry sprays have created a floral spray in the top left hand corner.
This Card is to be entered in the following Challenges:-
http://sugarbowlblog.blogspot.co.uk/
http://7kidschallengeblog.blogspot.co.uk/
http://www.addictedtostamps-challenge.blogspot.com.au/
http://carabbiemomentsofcraft.blogspot.co.uk/
http://frillyandfunkie.blogspot.co.uk/
http://www.inklingsandyarns.com/
http://stampotiquedesignerschallenge.blogspot.co.uk/ 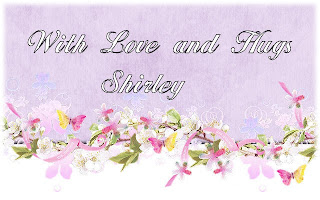 Posted by Nannieflash at 09:29

Shirley it's a stunner, love the lush berries, gorgeous.xx

Gorgeous card Shirley, I like the adorable image the papers and the holly.
Kevin xx

Darling image, Brilliantly supported by all that layering! Bravo!

This is a gorgeous card and love all the accents. Your coloring is fabulous!!
Nancy

This is an adorable Christmas card Shirley, such lovely traditional colours and beautiful embellishments.
Pauline
x

Gorgeous card and image, love those colors and great design. Thank you for joining us at Creative this fortnight. Abbie xx

Gorgeous card Shirley the colours and your design are beautiful, it looks stunning.
Hugs Linda

Fabulous card, love the big poinsettia and your image is just beautiful. Thank you for joining us at 7 Kids College Fund.
Hugs Kelly

Shirley this is "Outstanding" love what you have made with this gorgeous image, my lovely, roll on 5th October xxxx

Shirley, Love your darling image and she is colored just beautiful. Love your papers, holly ribbon, holly border and the arrangement of holly.
Hugs, Pat

Absolutely gorgeous Shirley.
This is the perfect Christmas card, with a very sweet image and all beautifully tied together with the papers and fab embellishments.
Love it ♥

Wow fabulous card! love your attention to detail and that image is just too too cute. Thanks for joining us this week at ATS&M.

A fabulous card and was a stunning embellishments .. love it!

Hope you had a good weekend.

Hi Shirley. Lovely cute Christmas card with lots of detail. Thanks for joining the fun at ATS&M. Good Luck! Monika

It's never too early for Christmas! Love the card! Thanks for participating in the www.7kidscollegefund.com challenge!

Delightful!
Thanks for entering at Creative Moments.
Leona x

Ohh lovely card and beautiful color, love that image!! Thank you for join us at Creative Moments this week, hugs Kate (DT)

this is just gorgeous!! Love all the embellies .. so nice to see you in the sugar bowl, hope to see you again this month 2!! Hugs Juls