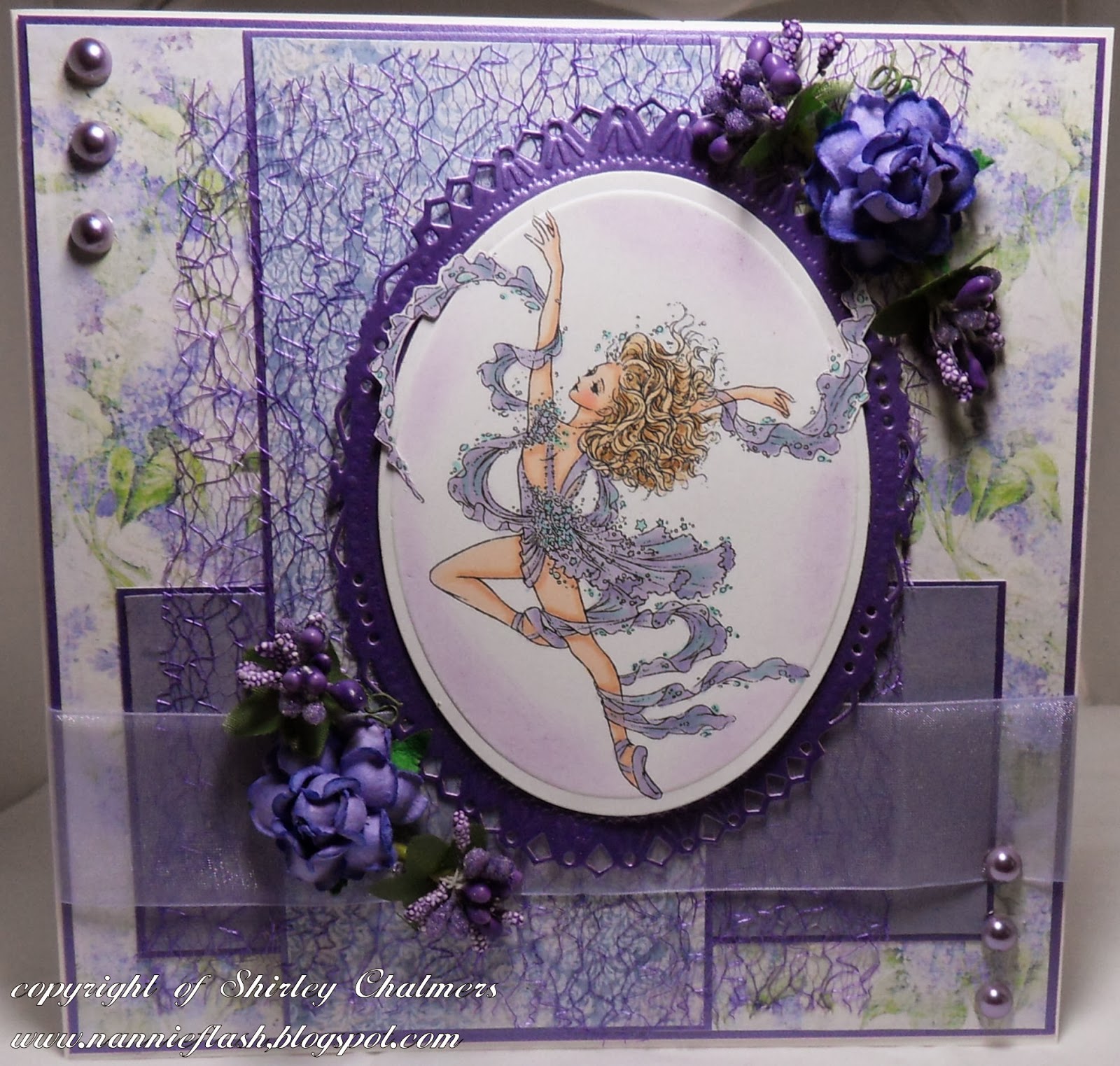 Posted by Nannieflash at 10:45

Shirley- what a fantastic creation

Wiw! Love the beautiful colours and details in your card. Thank you for joining us at Fitztown this week. Judy

What a beautiful card Shirley.

Hi Shirley, I hope you had a wonderful Christmas and New Year, I love your little fairy, gorgeous colour choice, beautifully done, looking forward to another wonderful crafting year ahead
Hugs Julie P

Shirley this is just a stunning card!
Purple seems to be "the" color this month, your is the 2nd I've seen just today.
Thanks for joining in the ribbon challenge at The Cheerful Stamp Pad.

WOW!! This is Gorgeous!!
Love the coloring and the color choice <3
Hugs

This is a beautiful card Shirley, I love your gorgeous image and lovey colours - one of my favourites as well.
Pauline
x

Thanking for sharing your work with all of us at Crafty Boot Challenges.

Gorgeous card Shirley, I like the beautiful image and the colours.
Kevin xx

Gorgeous card! The colors are stunning. Great details and layers! Thanks for joining us at Love to Scrap! Challenge Blog
Tina DT

Absolutely beautiful, I have popped over from MIM to take a closer look.

Gorgeous card, wonderful die cuts,papers and embellishing, very beautiful! Thanks for joining us at Lexi's Creations for our 'Anything Goes' challenge!

Wish you a happy New Year!!

Stunning card Shirley..beautiful image and colouring and love the purple..
Thanks for sharing with us at Make it Monday..

Thanks for sharing this lovely card for Cheerful Stamp Pad challenge 77: use some ribbon - Hazel, DT - hope to see you again soon x

These are my favorite colors too. Beautiful layout with pretty image and beautiful embellishments! Spotted your card on MIM.

A lovely creation. Thanks for sharing with us at Imagination Crafts.
Mags
x

simply beautiful! amazing colouring! Thanks for playing along with us this week at CCC with our anything goes challenge! Hope to see you again soon :) x

Stunning card!! I love the purple.You did a great job on coloring this image. Thanks for joining the Fitztown Challenge.

Such a pretty one! I LOVE this image!
Thanks for joining our "Anything goes" challenge at Fitztown!
Hope to see you again soon!
Hugs, Sande xx
Fitztown DT

A lovely card and image, thank you for joining our 4th Challenge, good luck. We hope to see you again soon.

a stunning card and amazing colouring - thanks for joining us at Imagination Crafts this month. Hugs rachel x