A Birthday Card for Mum 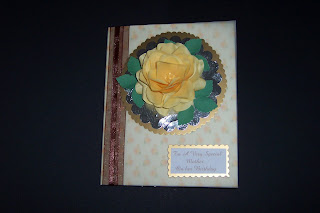 Todays card is one of two that I made for not only my mother-in-law's birthday, but also my daughter's, I will post hers next time.
The card was created around a Floral Punch Craft Rose. I originally made 3 roses, one red which was my first attempt at making them, the second was a pink one and this yellow rose. I wasnt sure what to do with them so I decided as the red one was my original one I would mount it and then I hang it in a frame on the wall in my craft room, maybe one day I will post that as well.
Anyway the rose was created by using a medium balloon craft punch shapes, a medium heart shapes and a small circle shape about 1/2" in size and instructions from the Floral Punch Craft Book by Leone Em.
You need to punch out at least 20 balloon shapes, these will need to be shaped into a cup shape with a tool called a Deet, you can also by turning the shapes over curl the edges like a real rose petal.
The shaped pieces are then attached around the small circle and then left to dry, when dried you start the second layer, and on till you reach the last couple of layers, these are created by cutting the 5 heart shapes into half and these also are shaped to fit inside the last 10 balloon shapes which make the petals look even more tightly shut. To finish of the rose, I cut a piece of yellow paper into a strip and made small cuts along the lenth, then rolled it up, feathered them out to make stamens for the centre, which also cover any of the circle that may still be showing.
The leaves which surround it are punched from the medium oak shape leaf.
The card itself is made up from white pearlised card which has been overlayed with a vellum wrap on which I have printed a rose design. The Rose itself was mounted on a silver nestability scalloped circle and then again onto a gold one. The card was then finished with the brown ribbon down the centre fold, and the greeting was printed from one I typed into my computer, which also was mounted onto gold card which had been scalloped around the edge.
Posted by Nannieflash at 13:50

wow shirley that looks so real im sure she will be thrilled with it , its a beautifull card x mandy