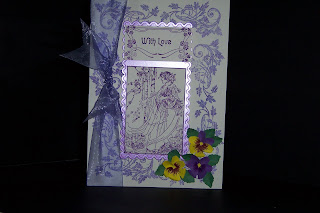 Todays card was originally based around the 3 violets that I created with my floral punches. They were punched from Violet and Yellow paper consisting of 4 small ovoid petals, 1 small snowflake for the base, 1 medium ichyou leaf, 1 small sparkle for the stamen and 3 to 4 birch leaves for the leaves for each flower.
I punched out the shapes and before starting I used a violet pen to create the markings, then I started cupping and embosing the ovoid petals, cupping the snowflake and the ichyou leaf with my Deet tool. These were then attached to the snowflake to create the flower, the centre was created with the small cupped sparkle. I also cupped and shapped the leaves ready to attach to the card.
The card itself was created with a piece of white card folded in half, then on top of this I used the shades of purple ink pad and a flourishes stamp to create the background. The stamped image is one of the limited edition stamps of Elusive Images which I stamped with Versafine Peony Purple ink pad, and the greetings were also done with the same inkpad.
These I mounted on mauve pearlescent card, cut with the long Classic Retangle Scalloped Die. I then mounted this onto the card and put a large mauve organza ribbon around the middle.
I finished the card with a arrangement of three violets which I stuck to the card with silicone glue and tucked the leaves under the flowers to create a setting.
Posted by Nannieflash at 15:31