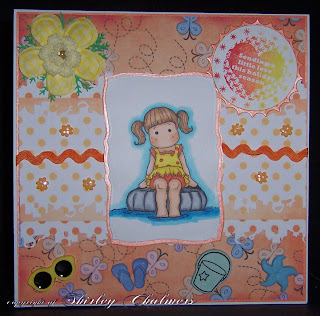 Im afraid Ive cheated again this week and made one card to cover two challenges, Just Magnolia's "Buttons" and Stampin for the Weekend's song title "Seasons in the Sun" by Terry Jacks. This is the last Challenge card I will be making for a couple of weeks as most of you know I have two of my grandsons coming to stay for a week's holiday, and we have to travel up to Norfolk to collect them next Friday. And as they will be sleeping in my craft room I have to hide or remove all things that might hurt them, and to be honest I wouldnt like them to damage some of my more expensive things. I do have a lot of lovely things for them to play with Im not that selfish, but I suspect we are all a bit protective of our craft things.

Anyway Ive have created a card with two of the new Magnolia Summer Club stamps, Ive stamped Tilda onto white card, then masked her to stamp the tyre afterwards, then I coloured her with my copic pens. I then used one of the larger Spellbinder dies to punch her out after which I have drawn around the edge of the same size die on some orange pearlescent card to create a mount for it sit on, these were then stuck together with some foam tape. The greeting is one of my Just-Right stamps, which I have also punched out with a circle die, and created a mount for it with the Inverted circle and pearlescent card.

The base card is a 8"x 8"size card, then Ive used for the first mount a piece of orange pearlescent card, and one of the patterns from the Bearly Mine Cd designs, and used it again for the second, third and forth layers, but these were punched along the edges with the EK Success Border punch, this one has sandcastles, spades and buckets design on it.

After I stuck them across the base layer, Ive put my greeting at the top on the right hand side to create the illusion of Sunshine, then put my mounted image in the centre. Along the bottom of the card I have stuck several buttons, these are sandels, sunglasses, a bucket and starfish.
I also stuck a further six small flower buttons across the centre either side of a piece of rik rak braid, which had been attached before I stuck my stamped image on. The final thing is the flower, this is one of the Prima Sprite flowers with a crochet flower in the centre and a pearl brad threaded through the middle, before sticking it to the card Ive arranged some punched out leaves in some silicone glue then stuck the flower on top.
Posted by Nannieflash at 15:43

Oh such a gorgeous card!
Love your beautiful colouring and sweet detail!
So happy that you have joined us at Just Magnolia!
hugs
kim x

What a beautiful card Shirley,l love the image and colours.
So gorgeous papers.

This is so pretty Shirley, a gorgeous card and such a pretty stamp. Thanks for taking part in this weeks SFTW and we will miss you while you are absent. Take care and have fun with the grandchildren
Clairex

Your card is gorgeous:O) Love the stunning Tilda, wonderful colouring. Your DP's are beautiful. The borders are brilliant, and the flower is amazing. Love the greeting.
Thank you for joining Stampin' for the Weekend this week. Good luck!
Nancy;O)

Hi Shirley...such a beautiful card sweetie as always :-) sorry iv not been about much this week. Not been too well as you know hun. I have a lil surprise over on my blog for you hoooo! & I need your postal address sweetie.
Have a fab weekend.

Hi again Shirley,
This is yet another adorable card I really do love visiting you blog every week and seeing all your inspiring cards :D Thank you!
Thank you for joining us at stampin' for the weekend and good luck with both challenges.

Beautiful card, Shirley! I love your cute Tilda, you did a fabulous job with masking. The papers are gorgeous and I love all the little buttons and details you added, especially the blue flip flops and the sunglasses.The yellow flower with the crochet one in the center is beautiful.
Thank you for joining us at SFTW and good luck! We hope you'll join us again next week. :)
Vanja

Shirley first can I congratulate you on winning Lisa's secret gift. Secondly this is truly wonderful I just adore the colours and that image of Tilda is wow.

This is beautiful Shirley, such lovely summery colours and what an adorable Tilda. I love the lil sunglasses embellishment, they are so cute, a perfect card for the theme "Seasons in the Sun". Thank you so much for taking part again this week with our challenge over at SFTW, good luck and have a great weekend xx vicki xx

your card is adorable! i love your coloring :)

What a fabulous card!Your colouring is wonderful and i love the details

What a pretty card Shirley and such a sweet image and i adore the papers and colours used.
Paula xxxx

What a lovely card - your last challenge card for 2 weeks!!! How will you survive the withdrawal symptoms LOL!!!

So many beautiful things on this card - I love it.

I hope you have fun with your grandchildren Shirley. I bet they love coming to stay with you.

Good afternoon Shirley, wow hunny what a totally fabulous card i am loving the image youve used here and all that detail youve added, its simply stunning!!
hugs Linda x

Fab card dear love the image and the great colour combo those papers are lush, hope you are having a great weekend
Hugs Jacqui x

gorgeous shirley, beautiful colouring and layout.. craft stuff and protective... yes totally agree with you on that one..
enjoy your grandsons sweetie. hugs rachxxx

Hi Shirley, a gorgeous card and such a cute image, I love the zesy colours you've picked for the DP's on this one, giving it a great summer feel.
Thanks for joing us this week on SFTW.& Good luck.
Hugs
Sheila xx

Fabulous card once again Shirley, love all the bright colors of oranges, yellows and blues. Your coloring is fab and I love all the little items you've added along the bottom.
Thank you for participating in the "Stampin' for the Weekend" challenge again this week.. Good luck and we hope you'll continue to join in on the challenges on a weekly basis. Have a great day and enjoy the time with your grandsons.
Donna xx

This is fabulous Shirly. the Tilda image is so sweet and I love the summery colours and all the great seaside embellies. Debbie x

what a fab card shirley love the colours x mandy

Gorgeous card sweetie, the image is adorable and the papers and embellies are fab! x

This is so lovely, full of wonderful details and gorgeous design,. Love your border punch, how fun!!!! Hope you enjoy your grandsons when they come to visit, I would be the same with my stash too :o)
-x-

Shirley, this card is so sweet as well. We are on the wait on summer here in Switzerland.. the last days it was just 13 degrees.. so no wather for taking a bath in the nearby lake.
Love and hugs,
Karina

Oooooo I so need to buy this stamp!!! She is so cute!! Thanks for sharing.

Good Evening Shirley,
I love your little image, that Tilda is so cute which ever way you colour her! I love your papers and your embelishments are just lovely, I love the sunglasses!

Thank you for playing along with us this week at "Stampin' for the weekend". We hope you can fun and that you continue to join us in our weekly challenges! Good Luck.

sweet card, I love the colours you have used.