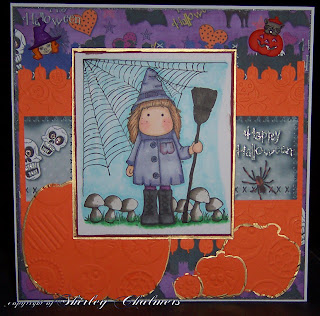 Ive created todays card for this weeks Just Magnolia Challenge, Embossing, but Ive also cheated and used it to make a card ready to send to my Granddaughter for Halloween, as Ive got several I think this probably better for the 14 year old.
Ive just the Halloween Tilda stamp and masked her then used the Spiders web stamp and the mushroom one as well. Then Ive coloured her with my copic pens and cut her out with my rotatrim, before mounting her onto some dark red card, Ive inked around the edge with a sepia inkpad, thats why its a bit smudged in places, daft me it has a naughty habit of going everywhere as well. Ive also used some gold pen around the edge of the dark red card.
The base card is a 8"x 8" white card and the first layer is a piece of black card with one of three papers Ive used from Donna's Bearly Mine Extreme Designs Cd.III this is from the Halloween folder. The first paper is a dark purple with lots of spooky thinks all over it, the second paper is a patchwork one of purple and black though its not easy to see, but Ive used the Graveyard border punch of Martha Stewart on it. The third layer has been put through my cuttlebug and Ive used a Halloween folder for this one and then used the pumpkin border punch on this, this is another of Martha Stewart punches.
The fourth layer is just a piece of orange card, and a third paper of grey patchwork and again spooky images on. Ive also used the pumpkin Nestabilitie diecuts and popped them through another of the halloween embossing folders, then with the same gold pen and because they blended in the the other layers Ive gone around the edges and stuck them along the bottom of my card.
The stamped mounted image has been positioned in the centre and two halloween buttons have then been stuck to the top either side of the mounted image.
Posted by Nannieflash at 12:13

Wow this is fantastic Shirley i have this stamp too havnt used it yet though.
Paula xxxx

love this card Shirley, I love the image, I haven't seen that one before.
poppy

Wow....this card is awesome. What a fabulous job you have done on the embossing! I love that Tilda image so much! I would love to order that one! Your grand-daughter is going to just love it! She will love the homemade card from you! As so would I!
Christine

his is just so sweet
xoxo BA

Gorgeous card Shirley! Love your sweet Tilda, looks like she's having a very spooky time and I bet your Granddaughter will love it. Great design and colouring and the papers are perfect. Hugs, Chris x

Shirley my Dear, this is a very cute Halloween card. Hope all is well.
Hugs~
Denise

Wow just fabulous Shirley....I am sure your grandaughter will love it!x

This card is just Fantastic, I love Halloween & this is perfect.

Oh this is just stunning Shirley dear, the colours and papers are just perfect for the halloweeen theme
Hugs Jacqui x

What a gorgeous Halloween card!

A lovely card with a great image.

My apologies for not being around to see you for a few days.

Life has been very busy on the home, work and craft front.

Such a shame I have to sleep - it feels like such a waste of time!! LOL!!

I haven't even caught up with you properly following your holiday. Did you find somewhere to buy a special ice cream?

Good morning Shirley
your card is wonderful!!!!
I love your colouring and papers!
Have a great day hun!
Big hugs Gisela

Great Card Shirley, love the image and the halloween theme. Thanks for linking to my candy and good luck in the draw. Kim

How cute is this! Fantastic detail Shirley, all the little finishing touches are just gorgeous
hugs
En xx