Stampin for the Weekend Challenge - Pink, Teal and Orange 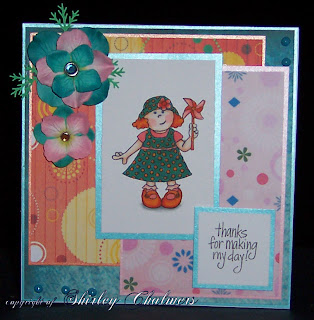 This weeks challenge is to create a card using the following colours Pink, Teal and Orange, a bit of a strange combination but it seems to work very well. Because I will be away for a few days next week its been a bit of a struggle to get things done before we go on Monday, so I rather cheated and used a image that had been given to me in a RAK, its a gorgeous little girl with a spotted dress and smashing hat, I coloured her with my copic pens then layered her up on a piece of Teal coloured pearlescent card, I did a similar thing with the sentiment, its one of my stash stamps that Ive used for this, and mounted it up in the same way as the image.
Now for a change Ive made a 6"x 6" card, I do find I have a lot less room to move around of this size card and this is the reason I rarely use it. Anyway for my first layer Ive used the same coloured pearlescent card, with one of three designs from Donna's new Extreme Design Vol.III cd, and used another for the second layer and with some orange card and a third one with some pink card, these were arranged on the base layer, and then I stuck my image in the centre, the sentiment was stuck with a bit of foam tape to the right handside at the bottom.
To finish of Ive created two flowers with my hydrangea petals, with a few punched out leaves behind and some left over teal coloured pearls in the opposite corners.
Posted by Nannieflash at 08:38

Lovely card, and the colours to do work so well together don't they, i agree I also thought they were strange to start with but have to admit I have made a couple of cards with those colours now.
Lovely layout and great colouring, thanks for joining us at SFTW and good luck.
Fiona xx

Hiya Shirley, this is a fab creation such, a lovely lil image which has been coloured beautifully. The papers are so pretty and work great with this weeks SFTW colour challenge. Thank you for joining in again this week, good luck and enjoy your weekend. xx vicki xx

Oh Hun this is just stunning love the colours and the gorgeous image, just trying to catch up with all my buddies, thanks for your good wishes dear they really help
Hugs Jacqui x

Hiya Shirley what a fab card i just love the colour combo and such a sweet little image perfectly coloured and what great papers.
Paula xxxx

What a great card, and such a cute image. I love the layout and your flowers are soooo pretty.

Thanks for joining us at SFTW and Good Luck!

Hi Shirley! This is a gorgeous card with an adorable image! I love the fabulous papers and the flowers. The teal pearls are such a lovely detail.
Thank you for joining us at SFTW and good luck! :)
Vanja

What a beautiful card Shirley,i love the image and colours.
So gorgeous papers.

A really swee card Shirley. Lovely choice of papers and the image is so cute. Thanks for taking part in this weeks SFTW
Clairexx

Another beautiful card Shirley, all the papers go so well together, and great little image you've used too, and colored so well.. Love the hydrangea arrangement too. Smashing.
Thankyou for joining us this week again at SFTW.
hugs
Donna xx

What a wonderul card again, Shirley!
I love this image and your colouring!
Have a great sunday!
Love and hugs Gisela

Fab card love the colours you have used and the image is so cute. Thanks for joining SFTW this week.