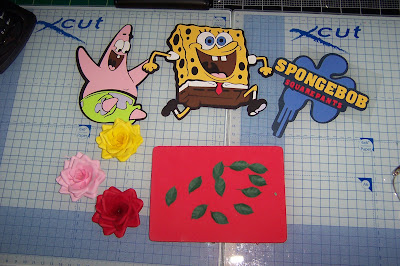 Well I do so hope that most of you enjoyed your bank holiday, and that the weather was kinder to you, unfortunately Gloucester wasnt the best place to be for hot weekend, the rain constantly showered and was also windy, but then I didnt go out on Sunday or Monday anyway, I decided as I was on my own, (hubby had gone to visit his two daughters and granddaughters and they needed some DIY jobs done) I would try and catch up with a few jobs around the house as I stated yesterday, but in the after noon, I then decided Id have a go at my floral punch craft again.
I punched out twenty balloon shapes in each of the three colours Ive used, and then with my moulding tool shaped them and with a circle of green paper, underneath I built up in several layers with the shaped petals that create the rose, the centre is done a bit differently but its then stuck in the centre to create the tight bud centre of a real rose, hope you like what Ive created. Ive now got to decide where and when Im going to use them.
I also dug out my cricut machine over the weekend, and cut out some of the new Spongebob Squarepants designs, with the new cartridge thats not long been released. I have several grandchildren that like this character and his mates, and thought they might like to use them on their bedroom door at their mums, anyway Ive popped them into the post so hopefully they will like them when they receive them in the next couple of days.
I thought youd like to know that today we are experiencing extremely heavy downfalls of rain, thunder and even hailstones, I do so hope this doesnt last to long as its rather a pain in the you know what, as I was hoping to pop out to the shops, oh well theres always tomorrow I suppose.
With love and hugs Shirleyxxxxxxxxx
Posted by Nannieflash at 14:09

Weather not much better here in the Fens and have been in the middle of a storm fo a couple of hours now.

Sounds like you got the creative juices flowing yesterday with some real fun images.

Oh Shirley love your beautiful flowers they are gorgeous!
Those youngsters of yours are going to adore your images!
hugs
kim x

That is just so clever! While the cat was away ;) you managed to get some crafting done! Kimx

Oh how much fun Shirley! I have the Spongebob cartridge because I have nearly 13 year old daughter that is in love with him!
I'm hoping she will make some fun things with it!
Hugs
Carole x