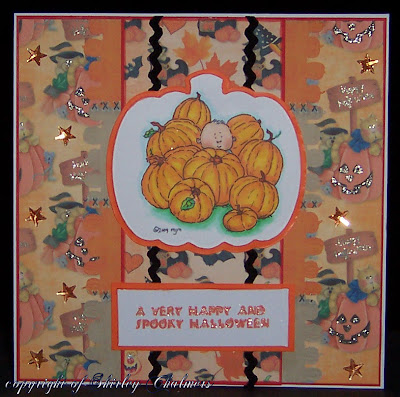 Well this is the second image of Mo Manning's that Im using for the little grandchildren in our family, I hope you wont be to surprised at my posting this as Ive still got at least three more Halloween cards to make but I will try to find something else to post next time as I dont want to bore you to much with these.
This image is so cute with a little head popping up in the centre of all those pumpkins, Ive coloured the image with my copic pens then used the Pumpkin Nestabilitie die to cut it out, because I used the largest die, I had to draw around the outside of the same one to create a mount for it, Ive used some orange card for this then mounted them together with some foam tape. The greeting is again one Ive printed from my computer and mounted this in the same way as the image.
The base card is my usual 8"x 8" white card, and for the first layer Ive used some red card, with yet again the Halloween designs from Donna's Extreme Designs Cd Vol.III, Ive found them extremely useful and so many different designs. This one is a orange pattern with all sorts of things on, pumpkins, cats, teddies and even some little mice. The second layer is a orange and beige patchwork pattern that Ive again used my pumpkin border punch down either side. It was then stuck down the middle of my base card, and on top of this I have layered up a third paper onto red card again and with some black rik rak brad stuck around it, positioned this in the centre of the last layer. Ive then stuck my mounted image in the centre and my greeting below. The final finishes are the star gems, which have to stuck at different places down either side of the base layer, and Ive even used my Sakura stardust pen on the eyes, noses and mouths of some of the little things on the paper.
Posted by Nannieflash at 11:16

Wow....... Shirley
your card is so pretty and I love this cute image and your colouring!
I wish you a wonderful day!!!
Big hugs Gisela

Your grandchildren are so lucky to receive such beautiful cards!

This is brilliant Shirley your grandchildren will love the beauties you are creating.

I love that image of the little one peeking his head out of the pumpkins..You have coloured it just perfectly too! Great job as always!
Christine

There's that adorable image again, it is so cute! Love this card Shirley.

Good evening Shirley, wowyou've been busy hunny with so many gorgeous cards since my last visit. I am loving them all. These digi images are fabulous!! your grand children will love their cards! hugs Linda x

Hi Shirley this is gorgeous love the DP's the image & colouring is fab your G/children will be thrilled with their cards ...

Wow!
Totally love your adorable card!
Such a cute image and so beautifully coloured!
Love your gorgeous design and detail!
hugs
kim x

This is really sparkly Shirley, even in the photo. I like the colours too, they are softer than usual for Halloween and work really well.
luv
En xx

Wow Shirly your Halloween card is fabulous i just adore the image and what fab details as always.
Paula xxxx

Hi Shirley, your card is lovely, i love the pumpkin shape and the image. Hope you are ok, Love Julie x

What a lovey card Shirley. I need to sit down tonight and try and make another card. Mojo not been up to much this last week or so but I will do my best. Daniel has a head cold and will be back at school monday. Take care
Clairex

Hello You! This Mo is just fantastic isn't she? Oh please bore us with more images (as if you could). You colour them so well it is inspiring, and I love how you tell us how the card was made. I learn so much from you.

Hiya Shirley,
how could we ever get bored of your wonderful cards... this is a wonderful image that you have coloured and brought to life.. hugs rachxx

Love love love it! This is just so cute Shirley. Fab colours and papers too xx

Shirley this is gorgeous, sweet image, your grandchildren will love their cards
hugs Mandy xx

This is fabulous Shirley, I love your halloween cards!
xx