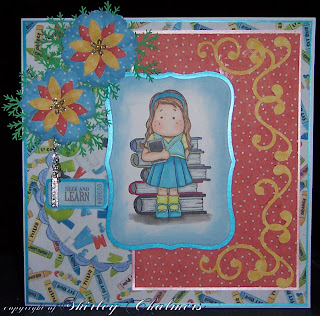 Todays card has been created for this weeks Cute Card Challenge - Back to School, and for this I have used one of the Tilda images masked with a pile of books behind her and coloured her with my copic pens. Afterwards with the new Labels Eight Nestabilitie die I cut her out and then draw around the same die to create a mount from blue pearlescent card for her to be mounted on but before doing so Ive used a blue chalk inkpad around the edge, I aso stamped the greeting and have done the same with this also.
For my base card Ive used the usual 8"x 8" white card and for the first layer Ive used a piece of same coloured pearlescent card and one of five patterned papers from the Look and Learn set of Nitwit Downloades. On top of this I have put a scalloped circle cut with my nestabilite die and the second of the papers, the third layer is a pink pearlescent card with a red spotted paper, Ive then stuck my mounted image on top in the centre with some foam tape.
I felt that it needed a little something so I punched some of the flourishes from yet another of the papers and stuck then down the right handside on the red spotted paper. I then created two flowers with my retro punches, layering up two blue spotted ones and one red and a yellow one, then put the pearl brad with a spacer through the centre, I did the same with the other flower but attached a couple of charms from this one, one is a ruler and the other a little girl. Before sticking them to my card Ive punched out some fern leaves and arranged them in some silicone glue before sticking my flowers on top.
Posted by Nannieflash at 13:57

lovely card Shirley, I hope your gobsmacked in a nice way lol.
love coming and looking on your blog.
poppy

Lovely card Shirley, the shading round the edge is perfect and all the colours blend so well together.

Thanks for the link.

Have a good break next week.

What a gorgeous back to school card :)

Shirley I love this image. I just placed an order with Magnolia, I wish I had added her..darn!
You have done such a beauty card!
Have a nice weekend!
Christine

Oooo Shirley this is really gorgeous, I love the colours you've used and you colouring always looks just perfect. Hope you have a lovely weekend
Love & hugs Mandy xx

Hi Shirley this is a lovey creation great DP's & colour combo fab Tilda too all flows together beautifly..

What a beautiful card Shirley,i love the image and colours.
So gorgeous papers.

This is just delightful Shirley, I love how you have masked Tilda in front of the books.
Have a great weekend.
Hugs
Carole x

Lovely Shirley, Love the colours and the image is perfect. Kim

such a pretty card and beautifully coloured Tilda. thanks for joining in the fun with us at CCT this week.
hugs, annie x

This card is great, Shirley. The different papers all work so well together.